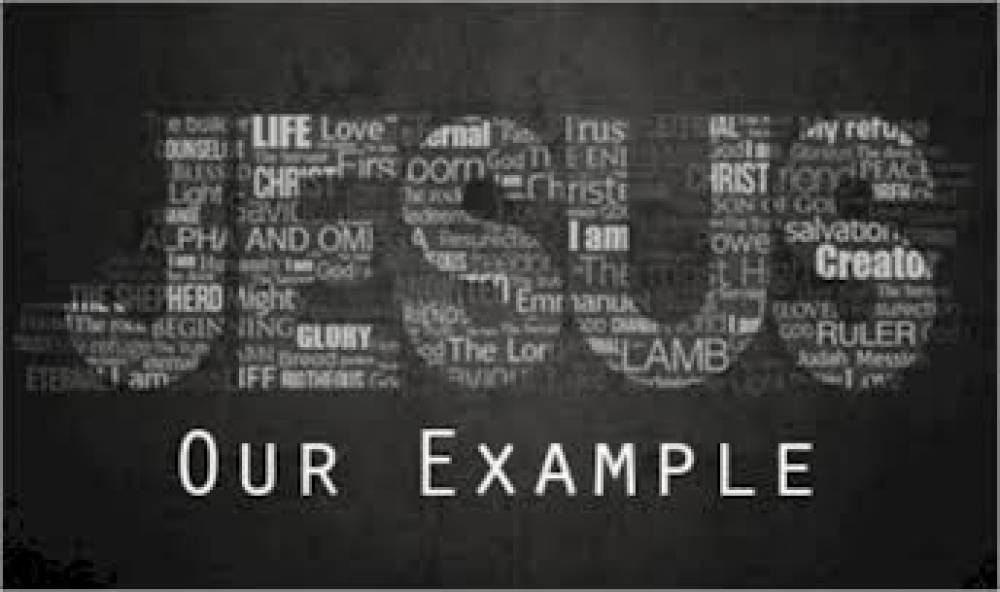 JESUS set the perfect example for us in various ways including;

1. HE WAS THE PERFECT EXAMPLE OF HUMILITY.

John 13:1-15 talks of how Jesus washed his disciples feet. Verse 15 says "I have set you an example that you should do as I have done for you."

This is Jesus, the Lord and Master who had been given all authority by the Father. The scriptures say that He knew all things had been put under His power.

He set a perfect example of how we should be as believers. It is not necessarily on washing each others' feet, but understanding that no one is greater than the other in the Kingdom of God.

People should not be more honoured than others in Churches based on their titles, papers, levels of education, social statuses etc.

2. HE WAS THE PERFECT EXAMPLE OF PATIENCE.

He suffered for doing good

1Peter 2:19 "For it is commendable if someone bears up under the pain of unjust suffering because they are conscious of God.

If we endure in sufferings for doing good, the act is commendable before God.

Verse 21 of the above scripture says that Jesus suffered for us, leaving an example, that we should walk in His footsteps.

Believers are priviledged in the sense that God fights their battles. We should, therefore never fight for ourselves in any situations. Jesus never stood up for Himself because He understood this too well.

In sufferings; being shamed, accused falsely, belittled etc, we should adopt a Christ-like mindset. He set the perfect example for the attitude to adopt in sufferings.

There is a God in Heaven that vindicates His people.

3. HE WAS THE PERFECT EXAMPLE OF LOVE.

Love is classified into vertical and horizontal.

In John 10:14&15, the scriptures paint a picture of the GREAT LOVE that Jesus showed by laying down His life for us; the sheep.

John 15:13 "Greater love has no one than this: to lay down one’s life for one’s friends.

Imagine what type of love it is to take somebody's place even in death? It is us who deserved the cruelty that Jesus was put through but he bore the shame, the pain, the agony all for love.

We must also follow in the same footsteps of our Lord as far as love is concerned. Those that demonstrate love in their dealings honour God and He will never forsake them.

Rom 5:8 says that God demonstrates His own love for us in the fact that when we were still sinners, Christ died for us.

4. HE WAS THE PERFECT EXAMPLE OF FORGIVENESS.

Luke 23:34 And Jesus said, “Father, forgive them, for they know not what they do.”And they cast lots to divide his garments.

Jesus made several statements at the cross. One of them was;

"Lord forgive them for they do not know what they do."

JESUS had all the power to destroy those that persecuted and crucified Him; He was God after all.

However, He chose to forgive them.

How many of us really forgive when wronged?

Unforgiveness is a sin and those that do not forgive have no place in the Kingdom of God.

Unforgiveness further blocks your spiritual path and prevents you from growing spiritually.

You have to prove that you have forgiven truly by saying it loudly. Jesus said it loud at the cross for His persecutors to hear.

Jesus was therefore, the perfect example of forgiveness.