The stronghold of sexual impurity

The Stronghold of Sexual Impurity
02 Feb 2022 | By Pst. Gitahi Daniel 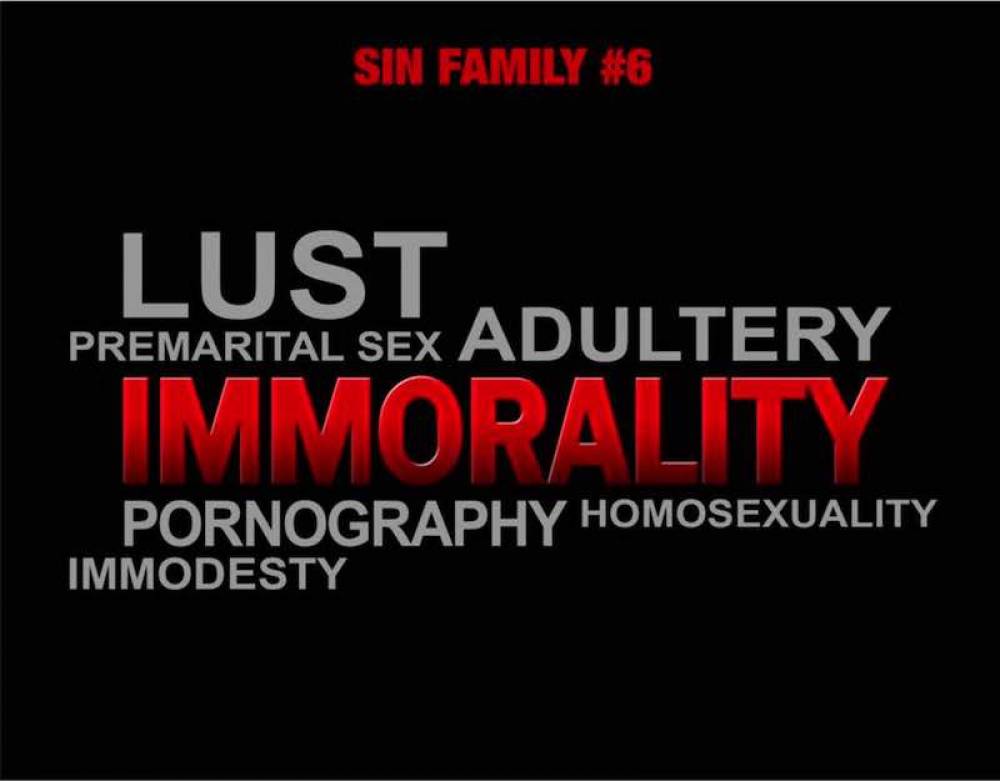 The devil knows that God detests sexual immorality. Sexual impurity is a perfect missile to a people that lack knowledge of it's serious implications.

Sexual Impurity takes many forms. The only time sex is allowed in the scriptures is in the confines of marriage, or rather between a husband and a wife. Sexual sins will only kill your destiny. Infact, great destinies have been cut off following this stronghold.

Prov 5 speaks of the consequences of sexual immorality.

Prov 6:32 says 'But the man who commits adultery is an utter fool, for he destroys himself.'

According to Deut 23:18, God doesn't accept defiled money. Dogs are used in the scriptures symbolically to signify wickedness. The Word is clear. Those that make a living out of prostitution should not take their offerings to God.

Here are examples of Sexual Sins

Rom 1:26 'That is why God abandoned them to their shameful desires. Even the women turned against the natural way to have sex and instead indulged in sex with each other.'

If sexual sins could be weighed, this one could take all the weight.

From the above scripture, it is God that abandons men to fall into this wicked desire.  Homosexuality is so unnatural, that God was disgusted with the towns of Sodom and Gomorrah, He sent sulphur to  destroy them. The lowest part in the world today is what used to be Sodom and Gomorrah. This place cannot hold life many years after God rained fire and sulphur on it.

If people practice this act and go unpunished, it is just by the grace of the Lord Jesus Christ.

Cursed is any nation that permits homosexuality. Lev 19:29

3. Adultery. This is when married people engage in sex outside marriage. Marriage bed is to be honoured God will judge those that commit adultery. Heb 13:4

4. Fornication. This is when people that are not married engage in sex as if they were married. This is one of those common acts of Sexual Impurity.

In the old testament, and in the law of moses, sexual sin/fornication, was punishable even by death. It was regarded as highly promiscuous (Deut 22:21)

5. Incest. This is sex within prohibited relationships like with a cousin, uncle and other relatives. It is highly detestable.  (Lev 18, Deut 27:23)

This is the act of marrying someone while already married to someone else. The scriptures do not allow polygamy. If you are still single, please don't marry an already married man.

This is sex with animals. It attracts instant judgement or rather death (Ex 22:19)

Just because the world popularises something, does not mean it sits well with God.

Dont bring judgement upon yourself in ignorance. Ignorance is not a defence in the judgement seat.

This is spiritual spouses kind of sex. Incubus and succubus demons are dangerous. Succubi is female sex demon. Incubi is the male version.

Demons take the form of familiar and unfamiliar people, then force themselves on human beings. In some instances, they take the form of animals. Seeing yourself having sex in dreams with your spouse who probably lives far from you is demonic. Men do not travel in the spirit, only spirits do. That is clearly a demon.  A man is a triune being, made up of soul, body and spirit. These three should not be defiled.

1Thes 5:23 says that our bodies, spirits and souls ought to be kept blameless.

This means that it is possible to sin through the soul, spirit or the body. Our thoughts, emotions and feelings should be pure.

According to Matt 5:28, looking lustfully at a woman/man is a way of committing  adultery.

Some people have being forcefully married to demons.  No wonder it is hard to get married in the physical. Some get married but separate after a while. Sexual defilement is lethal to the victims. Go on a fast/Involve a higher spiritual authority to put an end to all demonic bondage inflicting your spirit man.

10. Fantasy. Fantasy is produced in the imagination. It is when you are alone that your thoughts will wander. Fantasy is usually demon inspired. Some people will even undress people in front of them and imagine having sex with them. On the other hand, don't be a stumbling block. Dress appropriately that noone sees you and starts to drool.

Instead of fantasizing, teach your mind to meditate on the goodness and the Word of God. Fantasy requires deliverance.

11. Wedding to satan. Some people see themselves getting married to the devil in dreams. As strange as it sounds, you can get into sexual covenants with the enemy. Ensure that you do not  give him a foothold.

Viewing of sensual visual and print images/videos. Watching these videos and clips has really crept into today's society. At the click of a button, you can access a billion videos and images of this nature. It calls for us to discipline our eyes, as the gates to our souls.

Ps 86:11 'Teach me your ways that i may live according to your truth.

These are Tv shows, movies and such that are sensual in nature. The truth is that they attract demons in your house and life. Nudity in secular music is morally wrong.

Most secular songs nowadays are sensual. Why? To grasp the minds of men. To drive men into sexual slavery. Most of these songs have rituals behind them. The moment you watch, listen and sing such music, you attract the demon behind the song. In short you worship the god of this world. We should be decent and true in everything we do. (Rom 13:13)

Removing clothes in a seductive way, especially to the accompaniment of music. This act is prevalent in today's night clubs. It is highly abominable. There are many other such acts. These are just a few examples.

Anything in this world is not from God. We are in the world, but not of the world. Satan understands better how God detests sexual impurity, no wonder he unleashed this missile not only to the world, but also to the church. The trap of sexual bondage is dangerous. Escaping it can be such a task.

Sexual sins block/hinder your relationship with God. Make a decision to transform. Pray, fast, seek spiritual help. Dont lose yourself in the dungeons of sex.

If you have understanding, you will flee sinful sexual activities

Run from sexual sin! No other sin so clearly affects the body as this one does. For sexual immorality is a sin against your own body 1 Cor 6:18

The truth is, if you practice any of these immoral sexual acts, you have no place in the kingdom of God. Seek deliverance and be fleed from sexual impurity.